Lymphatic filariasis, to include elephantiasis: 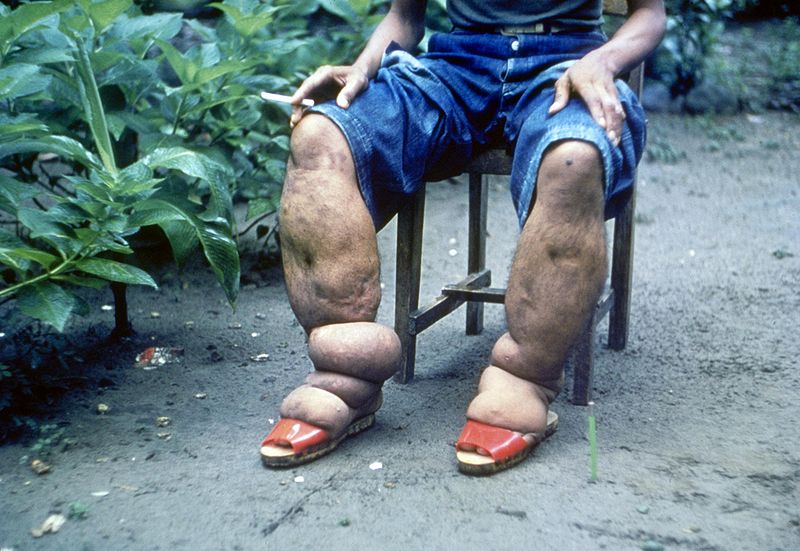 Lymphatic filariasis, to include elephantiasis:

Lymphatic filariasis, commonly known as elephantiasis, is a painful and profoundly disfiguring disease. It is caused by infection with parasites classified as nematodes (roundworms) of the family Filariodidea that are transmitted through the bites of infected mosquitos. Mosquito-transmitted larvae are deposited on the skin from where they can enter the body. The larvae then migrate to the lymphatic vessels where they develop into adult worms, thus continuing a cycle of transmission.

In communities where filariasis is transmitted, all ages are affected. While the infection may be acquired during childhood, its visible manifestations such as limbs oedema may occur later in life, causing temporary or permanent disability. In endemic countries, lymphatic filariasis has a major social and economic impact.

Lymphatic filariasis is caused by infection with parasites classified as nematodes (roundworms) of the family Filariodidea. There are 3 types of these thread-like filarial worms:

Adult worms nest in the lymphatic vessels and disrupt the normal function of the lymphatic system. The worms can live for approximately 6–8 years and, during their lifetime, produce millions of microfilariae (immature larvae) that circulate in the blood.

Mosquitoes are infected with microfilariae by ingesting blood when biting an infected host. Microfilariae mature into infective larvae within the mosquito. When infected mosquitoes bite people, mature parasite larvae are deposited on the skin from where they can enter the body. The larvae then migrate to the lymphatic vessels where they develop into adult worms, thus continuing the cycle of transmission.

Lymphatic filariasis is transmitted by different types of mosquitoes, for example by the Culex mosquito, widespread across urban and semi-urban areas, Anopheles, mainly found in rural areas, and Aedes, mainly in endemic islands in the Pacific.

About two in every three people who have lymphatic filariasis don’t have severe symptoms. But filariasis usually leads to a weakened immune system.

Some people may experience:

The standard method for diagnosing active infection is the identification of microfilariae in a blood smear by microscopic examination. The microfilariae that cause lymphatic filariasis circulate in the blood at night (called nocturnal periodicity). Blood collection should be done at night to coincide with the appearance of the microfilariae, and a thick smear should be made and stained with Giemsa or hematoxylin and eosin. For increased sensitivity, concentration techniques can be used.

Serologic techniques provide an alternative to microscopic detection of microfilariae for the diagnosis of lymphatic filariasis. Patients with active filarial infection typically have elevated levels of antifilarial IgG4 in the blood and these can be detected using routine assays.

Because lymphedema may develop many years after infection, lab tests are most likely to be negative with these patients.

Note: Rate under the appropriate body system any residual disability of infection, which includes, but is not limited to, epididymitis, lymphangitis, lymphatic obstruction, or lymphedema affecting extremities, genitals, and/or breasts.