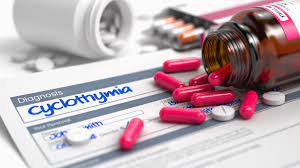 Cyclothymia, or cyclothymic disorder, causes mood changes – from feeling low to emotional highs. Cyclothymia has many similarities to bipolar disorder. Most people's symptoms are mild enough that they do not seek mental health treatment, or the emotional highs feel nice, so they do not realize there's anything wrong or want to seek help. This means cyclothymia often goes undiagnosed and untreated. But the mood swings can affect daily life, and cause problems with personal and work relationships. People with cyclothymia are at risk of developing bipolar disorder, so it's important to get help before reaching this stage. Men and women of any age can get cyclothymia, but it's more common in women.

Cyclothymia symptoms alternate between emotional highs and lows. The highs of cyclothymia include symptoms of an elevated mood (hypomanic symptoms). The lows consist of mild or moderate depressive symptoms.

Cyclothymia symptoms are similar to those of bipolar I or II disorder, but they're less severe. When you have cyclothymia, you can typically function in your daily life, though not always well. The unpredictable nature of your mood shifts may significantly disrupt your life because you never know how you're going to feel.

Signs and symptoms of the highs of cyclothymia may include:

Signs and symptoms of the lows of cyclothymia may include:

Diagnosis begins with a general medical history and physical exam, blood work to screen for substance abuse and to rule out other illnesses with similar symptoms, and mental status and psychiatric exam.

An adult is diagnosed with cyclothymia when:

symptoms (alternating “highs” and “lows”) have been present for at least 50 percent of the time for at least 2 years, and there has not been more than a 2-month period of being symptom-free, and symptoms are not due to substance abuse or a medical condition

In addition, symptoms must cause significant distress or impairment in daily functioning, but cannot be severe enough to meet criteria for either major depressive disorder or bipolar disorder.

For children and adolescents, symptoms must be present for 1 year.