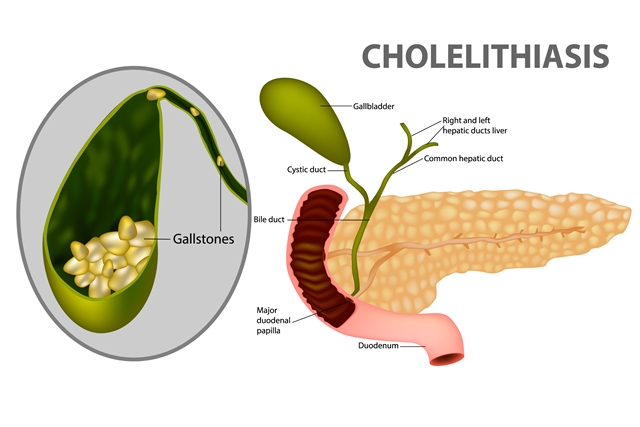 The gall stones that form inside the gallbladder are clinically known as Cholelithiasis. Six percent of grown-up men and 10% of grown-up ladies are influenced.

The cause of cholelithiasis is not totally understood, however it is thought to have different factors. The gallbladder stores bile and releases it into the small intestine when it is required for digestion. Gallstones can create if the bile contains a lot cholesterol or a lot bilirubin (one of the components of bile), or if the gallbladder is dysfunctional and can't release the bile.

Various types of gallstones structure in cholelithiasis. The most well-known sort, called a cholesterol stone, results from the presence of a lot of cholesterol in the bile. Another kind of stone, called a pigment stone, is framed from excess bilirubin, a waste item made by the breakdown of the red blood cells in the liver. The size and number of gallstones varies in cholelithiasis; the gallbladder can shape numerous small stones or one huge stone.

What Are The Symptoms Of Cholelithiasis?

Cholelithiasis may cause aggravation and inflammation of the gallbladder (cholecystitis) that can result in a number of symptoms. The symptoms can shift in intensity among individuals.

You may encounter cholecystitis symptoms day by day or just every so often. Now and again, any of these normal symptoms can be severe:

Rate as for chronic cholecystitis.

Moderate; gall bladder dyspepsia, confirmed by X-ray technique, and with infrequent attacks (not over two or three a year) of gall bladder colic, with or without jaundice