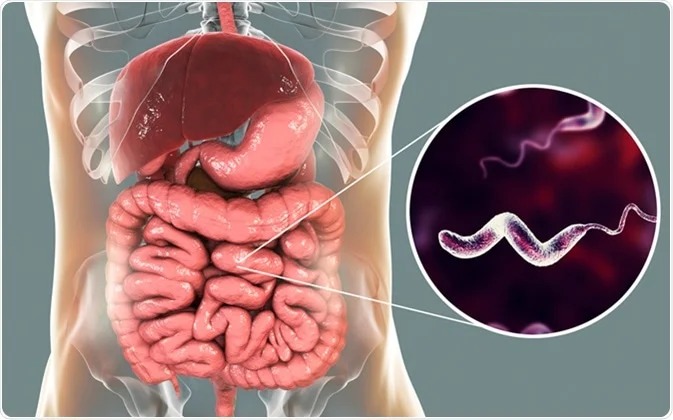 Campylobacteriosis as a disease entity was first recognized by Theodor Escherich in , who described the symptoms of intestinal Campylobacter infections in children as “cholera infantum” or “summer complaint.” However, the organisms were not easily cultured or characterized, which precluded their recognition as major causes of disease until the s.

Campylobacter jejuni is a gram-negative rod-shaped bacterium that grows best in a high temperature (42°C, or 107°F) and low oxygen environment. These characteristics represent adaptations to growth in its normal habitat, the intestines of warm-blooded birds and mammals. Several closely-related bacterial species with similar characteristics, C. coli, C. fetus, and C. upsalienis, may also cause disease in humans but are responsible for less than 1% of human infections annually. The optimal conditions required for the growth of Campylobacter make it difficult to isolate in the laboratory from fecal specimens without special techniques, including the use of selective culture media.

People can get Campylobacter infection by eating raw or undercooked poultry or eating something that touched it. They can also get it from eating other foods, including seafood, meat, and produce, by contact with animals, and by drinking untreated water.

A Campylobacter infection has symptoms that you would expect with so-called stomach flu (which is not the same as influenza, a respiratory illness). You may have:

Not everyone will get sick. Those who do get sick usually start feeling ill one to seven days after infection. Symptoms last about one week.

Your health care provider will perform a physical exam. These tests may be done:

Note: Rate under the appropriate body system any residual disability of infection, which includes, but is not limited to, Guillain-Barre syndrome, reactive arthritis, or uveitis.